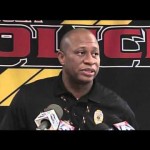 Last week The Rotary Club of Tuscaloosa welcomed Tuscaloosa Chief of Police Steve Anderson. Chief Anderson encouraged everyone to go out and support the youth in the production of the Nutcracker this weekend. There is talk of an interesting “guest performer”……These youth are out there involved in something good while many of our youth are not. We need to support programs like this to encourage our young people.

He reminded us that while the Christmas season is about Rejoicing in Christ’s birth, and that is the focus of so many – the focus for some is to take advantage of others during the Holidays. At this time of year, the occurrence of home invasions, robbery and vehicle break-ins rises.

The Police Department has taken every opportunity to reduce crime in traditional ways, but also in non-traditional ways like Facebook, Twitter, etc. where they can receive tips from citizens in these ways but also these social media outlets provide them with a way to immediately get the word out about potential issues, etc. He invited everyone that is on Facebook to like their page. He also added that there is a friendly rivalry between their Facebook page and the County Sherriff’s Facebook page! He followed up that statement by informing us that the four local law enforcement entities (Tuscaloosa Police Department, Tuscaloosa County Sherriff’s Department, Northport Police Department and the UA Police Department) are working more closely together than ever and there is a wonderful relationship between these departments. There are two joint units for Narcotics and Homicide that have representatives from all four agencies.

Chief Anderson said that there has been a slight decrease again this year in the crime rate in Tuscaloosa area. He also said that crimes can be anonymously reported and that you can check out the crime report locally to see what types of crimes have been committed and where in Tuscaloosa online.

Chief Anderson answered several questions about game day protection – which he said consists of 150 – 200 officers and support personnel and planning that begins months in advance to the new traffic cameras that will be installed soon.

In spring 2013 the Alberta Precinct will reopen and there will be a new precinct in West End. This will also continue to serve our citizens better by offering not only a crime deterrent but faster response times.

He commented on the Mayor’s Hope Initiative and what a difference that has made in our community as our faith based organizations have partnered to prevent crime.

The Police Athletic League is being headed up by Lily Leatherwood. This wonderful program allows kids a place to meet and learn from mentors. Kids these days are exposed to a lot of negative content on the Internet and it is more important than ever to intervene so that they don’t go astray – and possibly join gangs.

He did say that gangs are still an issue in Tuscaloosa and that there are 800 – 1000 gang members locally from about 20 gangs. The TPD uses maps with gang territory marked to combat the actions of the gangs. They are not as well organized as larger cities and they are more like allegiances to friends that these members have grown up with rather than targeted violence. There has been an influx of Motorcycle gangs – one is the Devil’s Disciples which are known for drugs, prostitution and firearms.

He ended by encouraging everyone to have a safe holiday season, and provided a pamphlet that was co-produced with the UA Police Department.