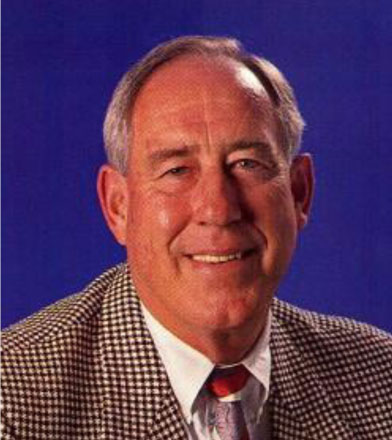 Charles Martin “C.M.” Newton, a native of Rockwood, Tennessee, has been involved in the game of basketball for more than 50 years as a player, coach and administrator. As a player, Newton was a member of the 1951 University of Kentucky team that compiled a 32-2 record and won the NCAA championship. From 1956 to 1989, Newton coached at Transylvania College, the University of Alabama and Vanderbilt University and compiled a 509-375 record. He led Alabama to SEC championships in 1974, 1975 and 1976 and appearances in four NIT and two NCAA Tournaments. He led Vanderbilt into the 1988 and 1989 NCAA Tournament and was named SEC Coach of the Year in 1972, 1978 and 1979. Newton became athletic director at Kentucky in 1989 and is credited with hiring Bernadette Mattox, the school’s first African-American women’s basketball coach (1985) and Orlando “Tubby” Smith, the school’s first African-American men’s basketball coach (1997). Newton, who has served on numerous NCAA Division I Basketball Committee’s, was President of USA Basketball from 1992 to 1996, when the U.S. Olympic Team went from college to professional players, and was instrumental in the selection of the original Dream Team in 1992.