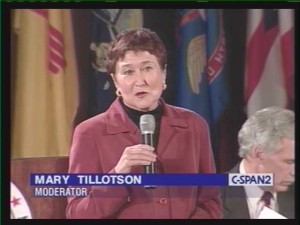 Mary Tillotson is a retired broadcast journalist having grown up and now living in Tuscaloosa. Ms. Tillotson was best known for her CNN reporting when she was a White House correspondent and host of CNN & Co and one of the most recognized news anchors at CNN.  CNN & Co. earned back to back nominations for a Daytime Emmy for Outstanding Talk Show.

She attended the University of Alabama majoring in journalism. She worked for WSB in Atlanta and later joined WTTG-TV in Washington, D. C.  She was a congressional reporter for Independent Television News Association (1988-1991) and a news anchor for Mutual Radio Network.

Ms. Tillotson joined CNN in 1981, and reported from the White House from 1985-1988 and 1991-1993. She covered the 1984 presidential campaign, including the Democratic National Convention, and the 1988 Republican and Democratic National Conventions, as well as the 1992 presidential campaign; she also covered two international summits between Ronald Reagan and Mikhail Gorbachev. From 1993-1999 she was the permanent host for CNN & Co.

This program promises to be entertaining and informative.  Ms. Tillotson will share her wealth of experiences and perspectives. Never at a loss for words she will thrill us with stories from the past and reflections on the current events that dominate U.S. domestic and international news.