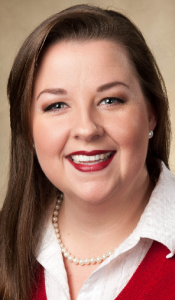 Ashley Olive joined the University of Alabama Alumni Affairs team in 2009 as the Alumni Events Coordinator and later took on managing the travel program. Ashley oversees major operations for Homecoming, A-Day, away football game events and the Executive Board. She also directs the “Travelin’ with the Tide” tour program, which takes her to destinations around the world with Alabama supporters. The program includes trips to away football games, bowl games and various sports tournaments, and she has been involved in more than 30 educational programs on all seven continents.

Ashley grew up in central Florida, but with roots reaching back to north Alabama, and is a third-generation alum of the University of Alabama, graduating in 2005. Her grandmother, Laurene Saddler Gilmore, was the first dean of nursing.

Ashley’s role at Alabama, in combination with personal travels, has taken her from the cathedrals of Europe to the grasslands of East Africa, from the sparkling waters of the South Pacific to the time capsule of Cuba, and all over America. She is on the board of the Junior League of Tuscaloosa and a member of Christ Episcopal Church. She is married to David Olive and has two step-daughters, 18-year-old Hannah and16-year-old Jessica.