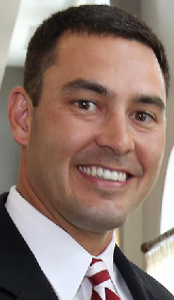 Walt Larisey has been chief executive officer of the YMCA of Tuscaloosa County since May 2011.

Walt lived in Tuscaloosa until he was 11 years old and then moved to Birmingham, where he graduated from high school in 1999. Upon graduation he enlisted in the Marine Corps Reserves and in 2004 he graduated from the University of Alabama with a degree in business management. Immediately upon graduation, he accepted his commission as a second lieutenant in the United States Marine Corps.

In September 2004, Walt moved to Quantico, Va., for Marine Officer training and was selected to be an infantry officer. His first duty station was in 29 Palms, Calif., where he was a platoon commander for Lima Company, 3rd Battalion 7th Marine Regiment. He deployed to Ramadi, Iraq, in 2005. After returning, he was assigned as a platoon commander for Weapons Company and again deployed to Ramadi in 2007. In January 2008 he was assigned to be an instructor at the Basic School in Quantico, where his specialty was in the field of military operations in urban terrain. In June 2010, Walt rejoined the Marine Corps Reserves and moved to Huntsville, where he became a company commander and also worked as a senior consultant for Booze Allen Hamilton, a government consulting firm. After a year there, he moved to Tuscaloosa to head the YMCA.

He is president of the Druid City Business League, the district chair for West Alabama Early Intervention and sits on the Governor of Alabama’s Inter-Coordinating Council for Special Needs Children.

Walt and his wife Amber have three children, Luke, 7, Cole, 4, and Annabelle, 3.