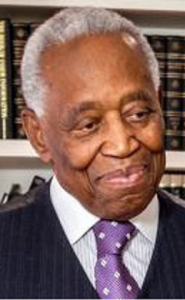 Tuscaloosa native John W. Barfield, 88, was born to a family of sharecroppers, moved north with his family as a child and, after serving in the U.S. Army, began working as a custodian at the University of Michigan, a job he, along with his wife, Betty, parlayed into a successful cleaning business.

Discovering he had a talent for entrepreneurship, Barfield would go on to establish several more companies providing a variety of products and services that have grown into a multibillion-dollar operation.

Now retired, Barfield still lives in Ann Arbor with his wife and has written a memoir, “Starting From Scratch: The Humble Beginnings of a Two Billion-Dollar Enterprise,” which he wants to use to raise money for those less fortunate. Barfield, who joined the Rotary Club of Ypsilanti in the 1960s, was struck by Rotary’s initiative to eradicate polio and eventually challenged his club to raise enough money to immunize one million children in developing countries. They raised enough to vaccinate just under half that number.

Last year, he approached the Rotary Foundation with a proposal to help finish the challenge by donating $15 from the sale of each of his hardcover books to Rotary’s PolioPlus program.

“I hope Rotarians will support it,” he told The Rotarian magazine for a story in the December 2015 issue, “because if we can save another 500,000 children from polio, it would be a wonderful legacy to leave. That’s my dream.”

“The secret to a long and healthy life,” he told the magazine, “is caring for people and doing as much as you possibly can for others, especially those less fortunate. That’s what I’d like to be remembered for.”