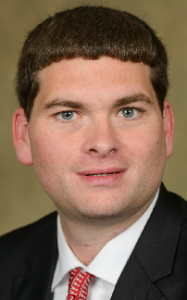 Bryan Davis is the research/media coordinator for the Alabama Center for Real Estate, based at the University of Alabama.

Bryan earned bachelor’s and master’s degrees from Delta State University. He taught high school world history and world geography, and worked at various newspapers in Mississippi, including the Yazoo Herald in his hometown, Yazoo City, and the Daily Times Leader in West Point, where he was managing editor and also a member of the Rotary Club.

In January 2014, he joined the staff of the Birmingham Business Journal, where he covered and analyzed all things real estate in the Birmingham metro area, including large economic development projects.

He came to the Alabama Center for Real Estate in September, when he also attended his first Alabama football game. His responsibilities at ACRE include the expansion of research content and the center’s multimedia platform.

Bryan and his wife, Callie, have a daughter, Ellie, who was born in November.