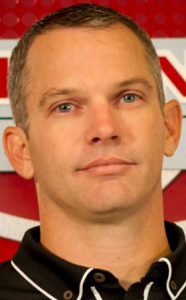 Ford Burttram is the head coach of the Alabama Adapted Athletics men’s basketball team at the University of Alabama.

He was invited to USA basketball tryouts three times and named an alternate one time for the USA Para-Olympic team. He was captain of the Alabama wheelchair basketball team from 2006-2009 as he finished his playing eligibility.

His coaching career began in Mobile, where he was head coach of the Mobile Patriots from 2002-2004. He also played in Mobile in 2005-2006 before coming to Alabama to finish his college career. He was the assistant coach of the UA women’s team in 2009-2010, when the team won a national championship, and the next season became an assistant coach for the UA men’s team, which won the national championship in 2013. He has been head coach for the past two seasons.