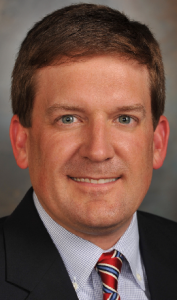 Rep. Bill Poole will give the club a summary of the recently completed session of the Alabama Legislature.

Poole was first elected to represent District 63 in the House of Representatives in 2010, and was re-elected without opposition in 2014. District 63 includes the University of Alabama, portions of the Tuscaloosa and Tuscaloosa County school districts
and much of the city of Tuscaloosa.

Poole was raised in Dayton, a small town in Marengo County, and graduated from the University of Alabama and the UA School of Law. He has been a general practice attorney in Tuscaloosa since 2004.

Poole and his wife, Niccole, are the parents of Sally, William and Whittman Poole. The Pooles are members of First United Methodist Church in Tuscaloosa. He is involved in several community groups, including the Chamber of Commerce of West Alabama and the Boys and Girls Club of West Alabama.