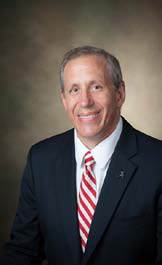 Stephen (Steve) Gregory Katsinas is Director of the Education Policy Center (EPC) at The University of Alabama, where he also serves as a Professor of Higher Education and Political Science. The Center is UA’s oldest center or institute.

Katsinas earned his bachelor’s in History from the University of Illinois, and his Master’s in History and doctorate in Higher Education from Southern Illinois University. He worked for House Postsecondary Education Subcommittee Chairman Paul Simon, and wrote the background report for the first hearings on Hispanic Access to Higher Education. He also worked for Clyde Choate, a Congressional Medal of Honor winner, representing SIU in the Illinois Legislature.

From 1985 to 1987, Katsinas directed UA’s Institute of Higher Education, and visited all 41 of Alabama’s community, junior, and technical colleges. He worked at Miami-Dade Community College, and taught at Oklahoma State University, and the Universities of Toledo and North Texas, where he was the youngest endowed chair in his field.

In 2005, Rotarian Jim McLean invited Katsinas to return to the Capstone to direct the Education Policy Center. The Center has hosted UA’s Superintendent’s Academy that provides finance, law, and leadership training. He heads EPC’s higher education research portfolio, which has produced 32 issue briefs and reports on access, finance, and governance issues. He has also authored or coauthored 7 books and monographs, and 28 articles since 2005 on access, finance, and governance issues. Katsinas sees higher education as the linchpin to Alabama’s long term economic and civic future.
He is married to the other “Dr. Katsinas,” Rene’. They are the parents of Steven, General
Manager and Chef at Effina’s Restaurant in Jacksonville, Alabama, and Elena, who
lives in Anniston, Alabama. They have three grandchildren.