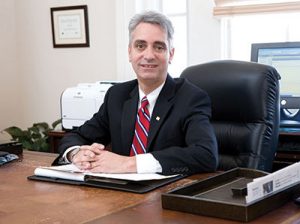 Dr. John Mascia is the Alabama Institute for Deaf and Blind’s 17th President. Dr. Mascia holds bachelor’s and master’s degrees in audiology and speech pathology from Hofstra University in New York and has a doctorate in audiology from the Pennsylvania College of Optometry, School of Audiology. He received his certificate of clinical competence in audiology from the American Speech-Language-Hearing Association and is a licensed audiologist. He has made numerous presentations and served in leadership roles with professional organizations and is widely published.

Dr. Mascia has worked as a supervising and chief audiologist and as an assistant professor in New York. In 1989, he joined the Helen Keller National Center, where he served as coordinator of Audiological Services, supervisor of the Speech and Hearing Department, coordinator of Professional Services and then finally as national director of Field Services. As a senior administrator, he was responsible for the supervision of regional representatives, national training programs, communit placement services and 45 affiliate programs. In 2005, he joined AIDB as executive director of the E.H. Gentry Facility and Regional Centers and was promoted to the role of vice president of Adult Programs in 2009. On January 1, 2013 he became President of AIDB.

Dr. Mascia is married to Nancy Mascia, and has three children, Chris, Katie,
and Annie.