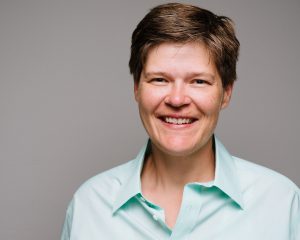 Kyes Stevens is the founder and director of the Alabama Prison Arts + Education Project at Auburn University, a program that serves 10 of the 15 major prison in Alabama through pre-college and college classes. In 2016, through this program, the first Bachelor of Science degree for the Alabama prison system was launched. Stevens worked with colleagues across the country to build the foundation for the National Alliance for Higher Education in Prison and has also been involved in the development of a national organization to support artists who teach in corrections. In addition, with colleagues from around the country, Stevens met several times with members of the Obama administration at the White House to discuss the role of higher education in criminal justice reform. Stevens earned her M.A. in Women’s History and M.F.A. in poetry from Sarah Lawrence College in New York. She is a poet who was awarded a fellowship from the National Endowment for the Arts and the Department of Justice to teach poetry at the Talladega Federal Prison in 2001 and built APAEP from that experience. She has completed eight residencies at the Lillian E. Smith Center for Creative Arts in Clayton, GA and was a co-recipient of the first Lillian E. Smith Writer in Service award. She received the Auburn University Young Alumni Achievement Award in 2012 and an Auburn University Women of Distinction Award in 2010. She was the 2014 Alabama State Council on the Arts Literary Arts Fellowship recipient. And in 2016 was recognized as an Al.com Woman Who Shapes the State. She was also selected as a 2016 Southerner of the Year by Southern Living.

Kyes Stevens is from Waverly, Alabama, where she resides with her partner, clarinetist and professor Lisa Oberlander (Columbus, GA). In addition to serving on her town council and working for the volunteer fire department in the past, Stevens is dedicated to animal rescue, and shares her home/land with a whole slew of rescue animals, including dogs, cats, chickens, and a donkey.