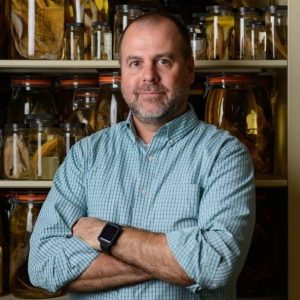 John Friel is the Director of the Alabama Museum of Natural History at the University of Alabama and was previously the Curator of Fishes, Amphibians and Reptiles, and a Senior Research Associate in the Dept. of Ecology and Evolutionary Biology at Cornell University. He received his BS in zoology from the University of Central Florida, and his Ph.D. in Zoology from Duke University. John has been a professional ichthyologist for over 20 years and has conducted field research on freshwater fishes throughout South America and Africa. Since moving to Alabama, he has been developing the museum’s biodiversity and citizen science initiatives including the Biodiversity of Alabama project on iNaturalist.