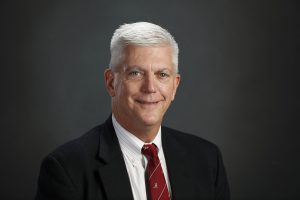 As Associate Athletics Director for the University of Alabama, Tommy Ford works in the Crimson Tide Foundation, overseeing the A-Club Alumni Association and the Red Elephant Club booster groups.

Ford, a native of Gadsden, Ala. and a 1974 graduate of Gadsden High School, earned his B.S. in Finance from the University of Alabama in 1978 and his M.A. in Higher Education Administration from Alabama in 1998.

As a student at the University from 1974-78, Ford served in the SGA Senate, Jasons, and Kappa Alpha fraternity, and during his senior year was sports editor of the Crimson White, Alabama’s student newspaper. After graduating from the Capstone, Ford returned to Gadsden before going back to the University in 1982.

From 1982-87, Ford worked for the National Alumni Association in alumni chapter development and fundraising. In 1987 he was hired as Assistant Ticket Manager in the Athletic Department, and then was promoted to Athletics Ticket Manager, where he served from 1987-93. For 13 years from 1993-2006, Ford was Director of TIDE PRIDE, the Athletics Department’s football and basketball ticket priority program. In 2006, he moved over to the Crimson Tide Foundation, where he helped start the Athletics Department’s first annual fund, now known as the Crimson Tide Scholarship Fund. He took over administration of the A-Club Alumni Association and Red Elephant clubs in 2009.

Ford’s time at Alabama also includes authoring or co-authoring 11 books about the Crimson Tide football program: Bama Under Bear; Alabama’s Family Tides; the University of Alabama All-Access Football Vault; the Alabama-Auburn Rivalry Football Vault; Bear Bryant on Leadership; Tornado to National Title # 14; Crimson Domination: The Process Behind Alabama’s 15th National Championship; A Season to Remember: Faith in the Midst of the Storm; Crimson Mission; and The University of Alabama Football Vault. His 11th book, 17 (on the 2017 national championship season), was released in July 2018.

Ford is married to the former Robin Rich of Gadsden, and the couple has one son, 21-year old John Michael.

Ford and his family are members of First Baptist Tuscaloosa, where he serves as a deacon and men’s small group leader.