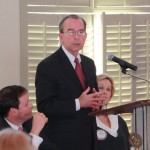 Since his arrival in 2003, University of Alabama President Dr. Robert Witt has sought to make Alabama “the University of choice for the best and the brightest.” On January 3 the Rotary Club of Tuscaloosa heard again from Dr. Witt on how much progress UA has made in recent years toward that lofty goal. Rotarian Pam Parker introduced our speaker.

Key for Witt and his colleagues has been the attempt to strike a balance between etween sustainable growth and excellence, while also maintaining an emphasis on stable finances, and the recruitment and retention of high-quality students and faculty.
The numbers bear out the success of the effort. As of Fall 2011 the University had 31,741 students, the largest student body in the school’s history. Fall also saw the enrollment of the the largest freshman class in UA history (5,572 students), and the strongest academically. The class included a remarkable 182 National Merit scholars. And while for the first time a majority of the student body are not from Alabama (49% are from out of state and 3% are international), the University’s first goal is still to take care of Alabama’s students. Every qualified student from Alabama who applies will be accepted, Witt said. Moreover, having so many from beyond our state is crucial for moving the University forward. Non-residents not only pay more in tuition, but also enrich the diversity of the student body and the students’ experience.

Dr. Witt also told Rotarians he is proud of the University’s emphasis on diversity overall. When compared with other flagship Universities in the U.S., he said, Alabama is second in number and quality of African American Students, third in African American faculty and in senior administration.

And of course there is the investment in building a new campus for the coming century. UA has made $ 1.3 billion investment in physical infrastructure and improvements. Much of this could not have been completed, Witt pointed out, without help from Senator Shelby’s grant and fundraising support.

But all of the numbers and accolades only tell part of the story. Although the April spared the campus, it cost six students lost their lives. And yet it brought out all that was best about the UA community. “I could not have been prouder of the reaction of students and facility,” Witt said.