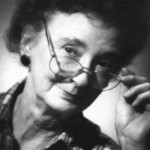 From Faulkner and O’Connor to Walker Percy, the American South has of course produced its share of gifted authors. And so has Alabama, of course, with the likes of Harper Lee and others. Last week, Tuscaloosa Rotarians heard from yet another of Alabama’s important literary personalities, Aileen Kilgore Henderson. Rotarian Jordan Plaster introduced the speaker.

Her marriage to a National Park Service ranger/naturalist provided Kilgore opportunity to live in several national parks, which enriched her writing. She began free-lancing articles and stories to newspapers and magazines in the 1960s while living in Southern California. The first of her seven books, The Summer of the Bonepile Monster, won the Milkweed Prize for Children’s Literature and the Alabama Library Association Award. Hard Times for Jake Smith won the Alabama Library Association Award.

Mrs. Henderson is a member of Delta Kappa Gamma and the Alabama Writers’ Forum. She also worked for many years as proofreader for Alabama Heritage Magazine.