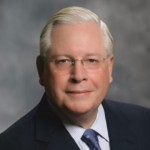 Rob Henrikson is former chairman of the board, president and chief executive officer of MetLife, a leading provider of insurance, annuities and employee benefit programs to 90 million customers worldwide. This week, Rotarians will hear from Mr. Henrikson on the current challenges and opportunities facing the insurance industry.

As CEO, Henrikson led MetLife to record financial heights, positioned the company to expand its leadership, and capitalized on emerging life, annuity and retirement markets around the globe. Today, MetLife counts over 90 of the top one hundred Fortune 500 companies among its corporate clients.

In July 2010, Henrikson was appointed by President Barack Obama to the President’s Export Council, the principal national advisory committee on international trade. He is the former chairman of the Financial Services Forum and immediate past chairman of the American Council of Life Insurers. Henrikson is also a board member of The New York Botanical Garden, the New York Philharmonic, the Partnership for New York City, and has also served as a board member of the American Museum of Natural History.

Henrikson received a B.A. from the University of Pennsylvania and a J.D. from Emory University School of Law. He resides in Connecticut with his wife of more than 30 years, Mary. They have two sons and two grandsons.