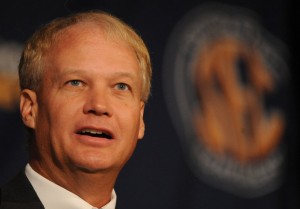 Steve has just completed his third season as Coordinator of Football Officials for the Southeastern Conference, this selection coming after completing 15 years as a Referee in the SEC.  Since becoming a member of the SEC Officiating staff, he was selected for fourteen Post-Season assignments, including two National Championship games, eight BCS Bowls and four SEC Championship Games.  They include the 2000 Sugar Bowl, 2005 and 2010 Orange Bowl, the 2003, 2009 and 2011 Rose Bowl, the 2006 and 2008 Fiesta Bowl, 2001 Gator Bowl, 2003 Sun Bowl and the 1997, 1998, 2001 & 2006 SEC Championship Games. Steve was the President of the SEC Football Officials Association (2009 – 2011), and had served his last three seasons as “Referee – In Chief.   He previously worked NCAA games as a member of the Gulf South Conference for six seasons, and was elected as “Referee – In Chief” from 1994 through 1996.  Steve worked High School football for 14 seasons (1981 – 1994) with the Birmingham Football Officials Association – and worked the 1991 Class “6A” Alabama State Championship Game.  Steve has received various officiating awards including the “Rush Lester Silver Dollar Award”.  Steve currently serves as Chairman on the Board of Directors for the National Association of Sports Officials (NASO).  He also serves the NCAA as Chair of the CCA National Mechanics Committee and is a member of the Editorial Sub-committee for Football Playing Rules.

Steve is married to the former Jamelle Kabase and they are current residents of Shoal Creek.  He is currently serving on the Board of Directors for the Fellowship of Christian Athletes for Central Alabama, the Board of Directors – Chairman for the National Association of Sports Officials and has just completed a six year term of the Board of Directors for the St. Vincent’s Hospital Foundation.   He has been elected to the Board of Governors – Shoal Creek Golf Club serving as Secretary and has also completed a three-year term on the Board of Directors – Greystone Golf Club.  Additionally, Steve currently serves as Vice-Chairman for the Region’s Tradition, a Champions PGA Tour event that has donated over $10 Million to local Alabama charities.  Steve has been presented the “Class of 2000 – Leadership Award” from the Alabama Chapter of the National Multiple Sclerosis Society for his leadership in fundraising efforts.  He also led the 2001 BellSouth United Way campaign, raising over $2M for the United Way of Central Alabama.

Steve and his wife are active members of Shades Mountain Baptist Church.