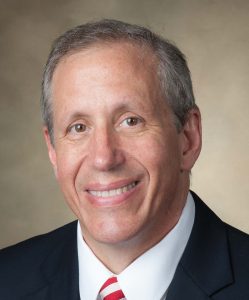 Steve Katsinas is Director of the Education Policy Center (EPC) at The University of
Alabama, where he also serves as a Professor of Higher Education and Political
Science. Established in 1924, the EPC is UA’s oldest center or institute.

Katsinas earned his bachelor’s in History from the University of Illinois, and his master’s
in History and doctorate in Higher Education from Southern Illinois University. He
worked for Senator Paul Simon when he was in the US House of Representatives, and
for WWII Congressional Medal of Honor winner Clyde Choate in the Illinois Legislature.

In his first stint at UA from 1985 to 1987, Steve visited all 41 of Alabama’s community,
junior, and technical colleges and interviewed Governor George Wallace. After work in
Miami, Oklahoma, Toledo and North Texas, Rotarian Jim McLean invited Steve in 2005
to return to the Capstone to direct UA’s Education Policy Center. From 2005 to 2016,
the Center hosted UA’s Superintendent’s Academy that provides finance, law, and
leadership training to current and aspiring public school leaders statewide.

Steve writes extensively on access, finance, transfer and student aid issues. In 2012, he
wrote a report proposing a new funding formula for the Alabama Community College
System. In 2015, EPC conducted a return on investment study for Alabama’s public
universities for the Higher Education Partnership of Alabama. In 2016, EPC conducted
an external evaluation of transfer and articulation policies and practices in Alabama.

Since 2011, he has presented at the White House 5 times and at the Departments of
Education and Agriculture 6 times each. In April 2018, EPC presented preliminary
results of a study of Pell Grants across Southern Regional Education Board states at a
Congressional Briefing hosted by the US Senate Appropriations Committee on the very
day that Senator Richard Shelby was sworn in as the first Alabamian to chair Senate
Appropriations in 200 years. Later that day, this was shared with Secretary Betsy
DeVos and her senior staff at the Department of Education.

Katsinas sees higher education as the linchpin to Alabama’s long-term economic and
civic future, and will talk about education and Alabama’s future.

He is married to the other “Dr. Katsinas,” Rene’. They are the parents of Steven,
General Manager and Chef at Effina’s Restaurant in Jacksonville, Alabama, and Elena,
who lives in Anniston, Alabama. They have four grandchildren.