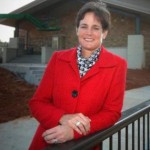 Susan West was our guest at last week’s meeting of the Rotary Club of Tuscaloosa. West is the new CEO of Tuscaloosa Tourism & Sports Commission. Rotarian Tina Jones introduced the speaker.

West, who was an assistant dean at the Manderson School of Business at Alabama before accepting the position, was among ten applicants chosen from a nationwide search. She focused her remarks on three key services that the TTSC offers: First, they promote events, meetings, and so on (West mentioned the dragon boat races as an example of a recent success). Second, they assist companies and individual citizens in planning large meetings. Finally, West noted her organization’s role in the bidding, staging, promotion and sponsorship of important sporting events.   The Blue Angels and the Super Six State Football Championships have been among the most visible successes, of course, and Tuscaloosa is now planning to host a regional Archery Championship.

The collective economic impact of West’s new organization on the city has been considerable. The numbers are still hard to gauge, but West estimates that in the last calendar year the events sponsored by the TTSC have had an economic impact of around $11 million in Tuscaloosa.