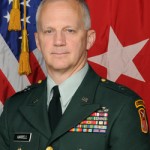 The Rotary Club of Tuscaloosa has a long tradition of members with decorated service in the military, and of celebrating and honoring our active duty armed forces members and veterans. Last Tuesday, in the spirit of Memorial Day, the Club continued to uphold that tradition. We welcomed Brigadier General Allen M. Harrell, who spoke to the club on a wide range of matters stemming from his long experience in the military. Rotarian Ray Farabee, whose long record of military service is well known to Tuscaloosa Rotarians, introduced the speaker.

Harrell is Deputy Commander of the 167th Theater Sustainment Command, a logistics headquarters for United States Army operations in North America. He is responsible for strategic planning and coordination of support to active duty and federalized reserve forces in the United States Northern Command, as well as strategic planning for the Northern Command.

Alabama is number known for being number one in football, but as General Harrell noted, it is also number one in National Guard service per capita. There are some 13,500 soldiers serving actively in the state (11,000 serving in the Army Guard and the remaining 2,500 serving in the Air Guard). And given the nation’s recent history of conflict, Harrell said, our soldiers are highly experienced: Most have had 3-4 tours of duty, and the majority of their service has been in Iraq and Afghanistan. The state also boasts some 1,000 training facilities and operational buildings, and claims over $400 million in federal money for the support of the Guard’s activities.

Harrell also spoke briefly to his responsibilities of his position for logistics and domestic security. Those tasks have included providing security for the Demographic and Republication national conventions, for example, security at the G8 Conference and the Olympics, and recovery from natural disasters.

General Harrell concluded with some remarks on what he considered to be the future of the armed forces and the Guard. That future, he suggested, centered on developing a much lighter fighting force, trained more in “irregular” warfare, which is characterized by forces with smaller numbers but more diverse training and a wider array of more focused capabilities.