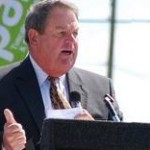 A lot has happened since Tuscaloosa County Probate Judge Hardy McCollum first took office. That was 36 years ago, in 1976, when finances were so poor that he had to borrow money to help the county make payroll.

Things are different now, as McCollum, who also serves as Chairman of the Tuscaloosa County Commission, seeks a seventh six-year term in office. The County now has about $40 million cash on hand, owing to what McCollum Celebrates as his fiscal conservatism, and to years of sound economic growth.

This week, Tuscaloosa Rotarians will hear more from Judge McCollum on both his storied past and vision for the future.

McCollum, a Democrat, is running against Tuscaloosa Rotary’s own Ted Sexton. Sexton, who serves as Tuscaloosa’s County Sheriff, began his campaign for probate judge after switching from the Democratic to the Republican Party this past year. A later visit from Sheriff Sexton will allow him equal time at the Rotary podium to make his case for office. The General election will be held on November 6th.

McCollum and his wife, Juanita, have two sons, Jay and Jason, and a daughter, Joy Collins. They have five grandchildren.