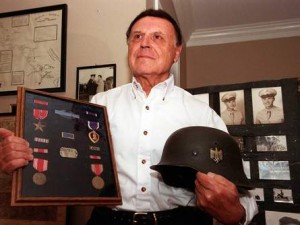 Rotarian Stan Bloom died at 9 pm Saturday, October 20, 2012, at Hospice of West Alabama. He was a member of the Rotary Club of Tuscaloosa from April 5, 1949, was a multiple Paul Harris Fellow and served the club as president in 1973-74.

Stan was one of the initial incorporators of the Tuscaloosa Rotary Memorial Foundation, and he served on its board of directors for most of its forty years. It was during his administration that the club launched its first service project, the Rotary International Student Center.

Stan was a second-generation Rotarian, his father and long-time member of the club Bill Bloom having served as president in 1956-57. For many years Stan and his wife Star hosted international students each fall at their lake house. They were jointly awarded the Rotary Rose on November 5, 1992.

Before his retirement, Stan was owner of Coed Collar, a women’s and children’s wear company located in Tuscaloosa and with nationwide distribution.

A memorial service will be held at Bloom Hillel, 380 9th Street, Tuesday, October 23, at 3:30 pm. A reception will follow at the Bloom’s home after the service.