Rotarian of the Week: Susan Caples 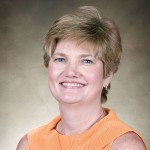 Last week Rotarian Debbie Besant took part in the Club’s new program of interviewing Club members to help Tuscaloosa Rotarians get to know everyone a little better. Debbie introduced Rotarian Susan Caples. Susan is the Assistant Director of Transportation for UA. She started with the University 25 years ago as a Senior Accountant in Investments before spending 18 years in Student Affairs.

Susan is a Native of Tuscaloosa that became an Auburn Graduate in 3 years with a Bachelors Degree in Finance. One month after graduation, she married her high school sweetheart, Jim Herndon, and they moved to Mobile where Susan took her first professional job.

In 1982, they returned to Tuscaloosa and Jim owned and operated a catfish farm in Boligee. Susan returned to school and received a Masters in Higher Education from the University of Alabama. Susan and Jim had two sons, Jay and Rob. She was widowed in 1999 and is now married to Bruce Caples, who also has two children, and his daughter, Emily, has given them their first grandchild, Mary Dunlap.

Susan would love to go to Alaska. She enjoys playing Grandmother, Wife, and UA’s Transportation Guru. Susan is also in the second year of serving a two year term as National President of Mortar Board.