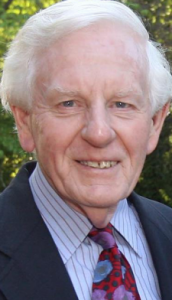 Donald Brown returns to us Tuesday with credentials as a leader in Rotary for nearly 30 years.

He is a beloved past president, a former editor of The Nerve and wrote “Timeless Service,” the book that commemorates our 90th anniversary of service to Tuscaloosa and Rotary International. Don also was active at the district level. He is an honorary member of the club.

Professionally, he was executive editor of the Tuscaloosa News for nine years, editor of the TimesDaily in Florence (Lauderdale County) for six years and editor of the monthly magazine Birmingham for 11 years. He now teaches advanced journalism at the University of Alabama. Today, Don will draw us into the literary world with a discussion of his latest book, “Gruesome!: A Novel Drawn from True Crime.” This is his first work of fiction, although in non-fiction he is a recognized author, editor and contributor to nine books.

Don and his wife, Hannah, have been Tuscaloosa residents for nearly 30 years, and are active in community issues. They have five children five grandchildren and two great grandchildren.