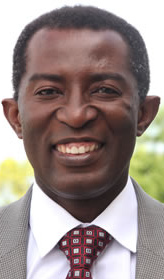 Sam Addy joined the Center for Business and Economic Research at the University of Alabama in 1998 and became director in 2007.

Dr. Addy works with CBER’s eco­nomic research program and has directed and conducted economic im­pact studies for numerous public and private clients across Alabama. Other areas of emphasis include analysis of the state’s workforce, fiscal policy, natural resource and environmental issues and socioeconomic analysis for transportation and other development projects.

He has presented papers at international conferences, been pub­lished in numerous academic journals and is often quoted in local, national and international media.

He obtained his U.S. citizenship in 2007 and is married with three children.