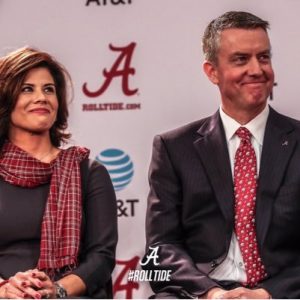 One of the most acclaimed and respected administrators in collegiate athletics, Greg Byrne was formally introduced as The University of Alabama’s Director of Athletics on January 19, 2017, and officially began his tenure leading the department on March 1. Byrne’s role at Alabama is his third venture at the helm of a major collegiate athletics program. Prior to coming to Alabama, Byrne was Vice President for Athletics at the University of Arizona from 2010-17 and was Director of Athletics at Mississippi State University from 2008-10. With more than 20 years of experience as an athletics administrator, Byrne has fashioned an impressive administrative career hallmarked by consistent success in fundraising, innovative strategies and competitive success with a strong emphasis on academic excellence. As the son of veteran athletics administrator Bill Byrne, one of the nation’s most prominent college sports administrators with 30 years of experience as an Athletics Director, Greg Byrne has been around the enterprise of running successful athletic programs for most of his life. A native of Pocatello, Idaho, Byrne earned his bachelor’s degree from Arizona State University in 1994 and his master’s degree from Mississippi State University in 2009. Byrne is married to the former Regina Misa of Junction City, Ore., and the couple has two sons, Nick and Davis.