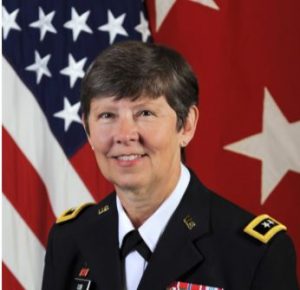 Janet Cobb became the eighth executive director of the USS Alabama Battleship Commission and Battleship Memorial Park on December 14, 2015 at the close of the park’s 50th anniversary year. She enlisted in the U.S. Army Reserve in 1974 and was commissioned as an officer in May 1978 from the University of Alabama ROTC program. She commanded at the detachment, battalion, brigade, directorate, brigadier general and major general levels. Her deployments include post-Desert Storm operations at the Ports of Al Jubayl and Ab Dammam, Saudi Arabia (1991); Operation Iraqi Freedom port operations, Port of Ash Shuyabah, Kuwait (2002-2003); Commander of the 598th Transportation Group (Terminal), the Netherlands (2007), with oversight of military ports in Europe and Africa; and Director, Central Command Deployment & Distribution Operations Center, Camp Arifjan, Kuwait (2011). She was mobilized and served in the Pentagon on the Army Staff as Deputy G-4 (2012). Her last assignment was Commanding General, 81st Regional Support Command, Fort Jackson, South Carolina. On August 15, 2016 she retired after 42 years in uniform. Janet Cobb holds an Alabama real estate license (inactive) and worked at Kaiser Realty in Gulf Shores, Alabama from 2005 – 2015 in the real estate development and property management divisions. She is the past Director of Marketing & Public Relations for the Boys & Girls Clubs of South Alabama in Mobile and is a former radio news director. She is a member of the Navy League (Mobile Council), American Legion Post 99 in Foley and Veterans of Foreign Wars Post 5658 in Elberta, as well as numerous other organizations.