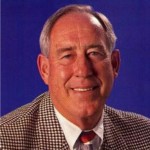 America is known for its love of money and markets. So it should be no surprise that the two have come to shape another of the nation’s great loves: college sports. Last Tuesday, legendary Alabama Basketball coach C.M. Newton, who knows all about how the N.C.A.A. works, offered his reflections on how that came to be.

Newton, who was hired at Alabama by Paul Bryant, led the Crimson Tide to an unprecedented three consecutive SEC crowns in Basketball and later went on to a distinguished career as an Athletic Director at Kentucky. Those years of experience and wisdom give him a particularly keen insight into the way of the world across the current N.C.A.A. landscape. Rotarian and longtime family friend Mitchell Loper introduced the speaker.

Without question, as Newton sees it, the model for big college football programs has been taken from the professional ranks of the NFL.  We are in a world of “dollar-driven athletics,” Newton said, in which we have created “multi-sport professional franchises.” One or at most two lead sports, basketball and football, make money for all of the others. And that, Newton said candidly, is simply a “bad business model.”

After the Oklahoma-Georgia antitrust lawsuit victory against the NCAA, college football organized itself independently in the conference alignments that eventually led us to the current BCS system. College basketball, meanwhile, remained under the governance of the NCAA, and retained its current tournament format. The consequences for revenue were significant: While NCAA basketball shares its revenues equally among all teams, the BCS conference schools award money according to championships and bowl games—thereby awarding the richer and most successful programs even more.

The new dynamic “really changes the intercollegiate athletic scene,” Newton said, and it is one that is fundamentally market driven. Television deals, marketing, even the canned music and other attractions (distractions?) in places like Bryant-Denny are all emulations of what has long gone on in pro sports arenas. Where once there were only marching bands, now we have light shows and rave music in between downs.

Looking to the future, Newton speculated that the dominance of money and markets would only continue. Within the next ten years, he suggested, four sixteen-team “superconferences” will emerge and break from NCAA. The moves are entirely football driven, in his opinion, and football is in turn focused—much like the pros—on larger and larger markets for television.

The money madness has even started to distort our traditional seasons. Recent scheduling has major college basketball on TV this November, allowing football and hoops to compete.  “It makes no sense to me,” Newton said, “to have our two  profit makers going head to head.”

Newton was skeptical as to whether this kind of model can be sustainable. Growing budgets to fund enormous stadiums and expensive programs are hard to make work, especially in the current economic climate. Of all of the SEC programs, Newton pointed out ominously, only five—Alabama, Georgia, Florida, LSU and Arkansas—are in the black.