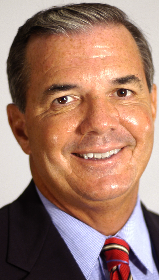 Mike Reilly is chairman of Randall-Reilly, a Tuscaloosa-based data, digital and media services company. Reilly joined the company, then known as Randall Publishing Co., in 1975. He became the company’s president in 1984, chief operations officer in 1987 and CEO in 2002. He became chairman of the board of directors this year. During his career, he has worked to expand the company’s core business as a publisher of trade journals for the trucking and construction industries into a full-service data, media and marketing services company for those industries. In the last five years, Randall-Reilly has seen a 131 percent increase in its bottom line. The company now has 350 employees, including 230 in Tuscaloosa. It also has offices in Charlotte, N.C., and New Berlin, Wis. Reilly served on the board of directors of the Federal Reserve Bank of Atlanta’s Birmingham Branch from 2009-2012. He previously served on the board of directors and chaired the boards of the Boys & Girls Club, the United Way of West Alabama and the YMCA of Tuscaloosa. He also served on the boards of the Chamber of Commerce of West Alabama, NorthRiver Yacht Club and American Business Media, and on the the Boy Scouts Executive Board of West Alabama. He is a graduate of the University of Alabama.